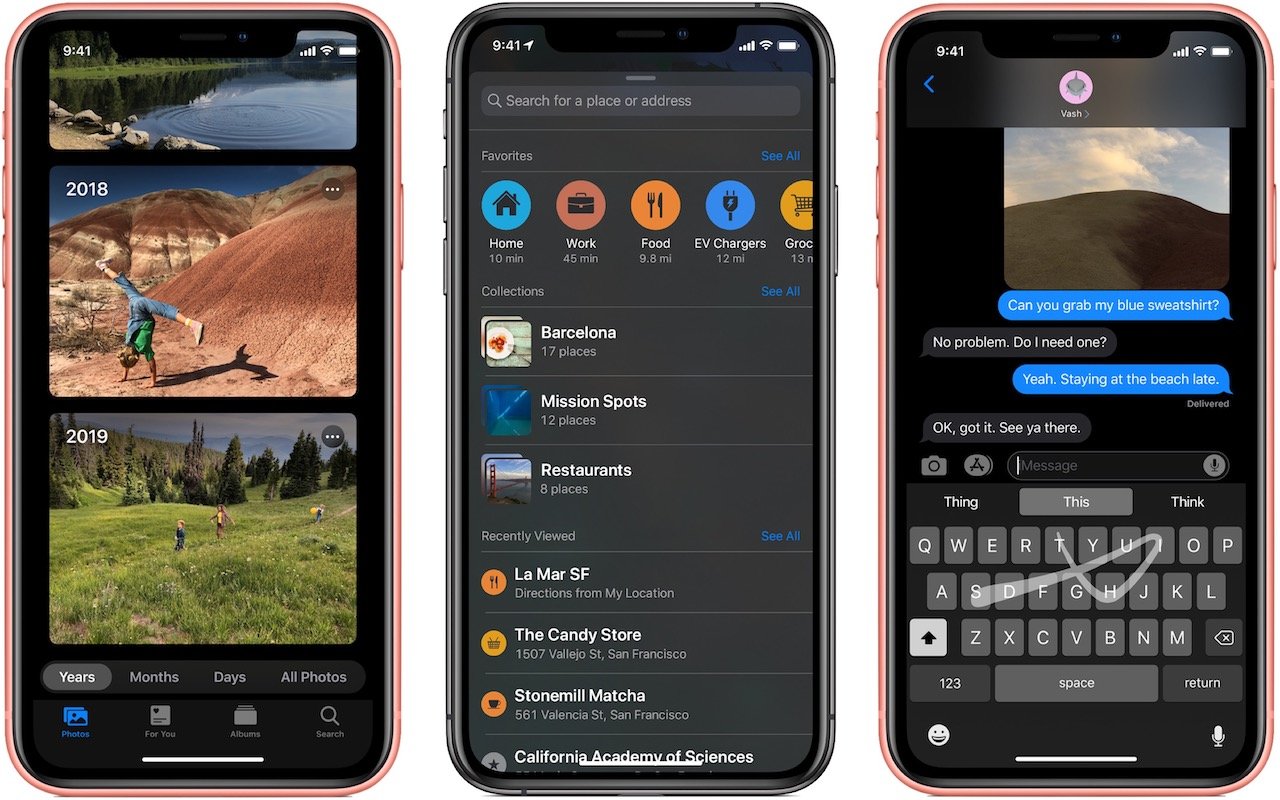 Later today (probably 1 pm Eastern) Apple will release iOS 13 and they will be releasing iPadOS 13 on the 24th. I do urge you to exercise caution when updating to iOS 13. In my opinion, they rushed the update out a bit prematurely because of tomorrow’s new iPhone 11 launch. On the 24th they will be releasing iOS 13.1 which will be quite a bit more polished. If you do decide to go ahead and upgrade to iOS 13 now just make sure that you have backups. I suggest both an iCloud backup and an encrypted iTunes backup. Chances are you will be fine, but that’s not a risk you should take. It would be prudent to wait just five more days for 13.1.

It’s hard sum up iOS 13’s benefits succinctly because Apple has made so many improvements (I’ll get to what’s cool about iPadOS 13 later in the article). That means there’s something for just about everyone. Here are some of the changes I think you’ll most appreciate.

An area in iOS that has long begged for improvement is text handling. Although the familiar approaches still work, you can finally select text by merely tapping and swiping. Double-taps select recognized bits of text like phone numbers and addresses, and triple and quadruple taps select sentences and paragraphs. You can even move the cursor by dragging it into position.

Apple enhanced iOS 13’s QuickType keyboard with a feature long offered by independent keyboards: swipe to type. Called QuickPath, the feature lets you swipe your finger from one letter to the next without picking it up. You can switch between swiping and tapping whenever you want. It works only on the iPhone and the iPad’s new floating keyboard.

None of the features are necessary to use, so if you just need basic text editing there is no need to learn all of the fancy gestures.

Apple has implemented its new Voice Control system in iOS 13 as well as macOS 10.15 Catalina, and it’s perhaps this year’s most impressive feature. Once you turn it on in Settings > Accessibility > Voice Control, you can use voice commands to switch apps, tap visible controls, and more. Plus, it lets you dictate text without invoking Siri.

The dictation now lets you delete text, replace text, and capitalize words, making it possible to edit what you’ve written without touching the keyboard. Voice Control may sound like it’s aimed at people who have trouble physically using iOS’s Multi-Touch interface, but it could be useful to anyone.

Those who use an iPad for serious work will love the updated Files app, which brings much of the power of Finder to iOS. Most notably, if you have Apple’s Lightning to USB3 Adapter or a new iPad Pro with USB-C, Files offers support for USB flash drives, SD cards, and hard drives. Plus, Files can also now connect to SMB-based file servers on your local network.

You can create folders on the iOS device’s local drive and store files there, viewing them in , list, and column views and sorting by name, date, size, kind, and tags. Files also now you zip and unzip files. Files also includes a document scanner that can create standalone files of scanned pages.

If you’re a fan of Dark mode in macOS 10.14 Mojave, you’ll be pleased to know that you can now switch to it in iOS too, or have it kick in automatically at night. Dark mode can even save some battery power on iPhones with OLED-based screens like the iPhone X, XS, XS Max, and 11 Pro. Third-party apps will need to release updates to automatically switch themselves to Dark Mode with your device. Some have already pushed those updates out.

Apple added numerous features to Photos, refactoring its interface to match the update in Catalina. It now provides an AI-curated selection of photos displayed by Years, Months, and Days—complete with event titles—plus an All Photos grid that shows everything. Live Photos and videos play automatically (without sound) as you scroll.

Editing has improved significantly, with Photos now offering tools to boost muted colors, sharpen edges, reduce noise, adjust color temperature, increase image clarity, and add vignettes. You can control the intensity of any filter, or of the automatic Enhance adjustments. Plus, nearly all the editing you can apply to a photo, you can use to edit a video, and video edits are now non-destructive.

Apple beefed up the Camera app for recent iPhones, so you can adjust the position and intensity of the studio lighting in Portrait Lighting, and it also gains a new High-Key Mono effect.

On the iPhone, the Health app gains features related to cycle tracking and fertility. Using data entered or imported from a third-party app, Health can now predict the start and end of a woman’s next three cycles and provide a notification when her period is approaching. Similarly, it can predict fertility windows and pop up an alert when one is approaching. Cycle Tracking, a companion Apple Watch app, will make it easier to log.

iOS 13’s Health app also now tracks headphone audio levels and alerts you if they reach dangerous levels. Another new Apple Watch app—Noise—listens to the ambient sound levels around you and warns you if they’re getting too loud.

Those may be the big changes, but I can’t resist sharing some more subtle ones too:

Most features of iOS 13 apply to the iPad as well, apart from those that are iPhone-specific, like the Health app. But iPadOS 13 is a superset of iOS 13, so it adds features to the iPad.

Apple improved the iPad’s multitasking capabilities in iPadOS 13 too. You can have multiple apps in Slide Over—just swipe up to see all of them or swipe along the bottom to switch between them. The big win in Split View in iPadOS 13 is the capability to have multiple windows from the same app open simultaneously, and it’s also now possible to have a window from the same app open in multiple spaces. The updated App Switcher now shows all spaces (Split View combinations) too.

Safari has grown up in iPadOS 13, becoming a desktop-class browser. That means it works better with complex Web apps like Google Docs, Squarespace, and WordPress. It also offers per-site settings, the option to save a set of tabs as bookmarks, a download manager, weak password warnings, and 30 new keyboard shortcuts.

iPadOS 13 works with the new Sidecar feature in Catalina to let you use an iPad as a Mac’s second screen or graphics tablet (with an Apple Pencil). You can use it either to extend your Desktop or to mirror a Mac’s screen, and it works either wired or wireless.

Speaking of the Apple Pencil, Apple has made it more responsive, redesigned the tool palette, and provided a pixel eraser tool. You can also now use an Apple Pencil to take screenshots, and even capture and mark up an entire document, email, or Web page.

Phew! There’s a lot to like in iOS 13 and iPadOS 13, but there’s also a lot to learn, so make sure you find some time to incorporate the new features into your usage.