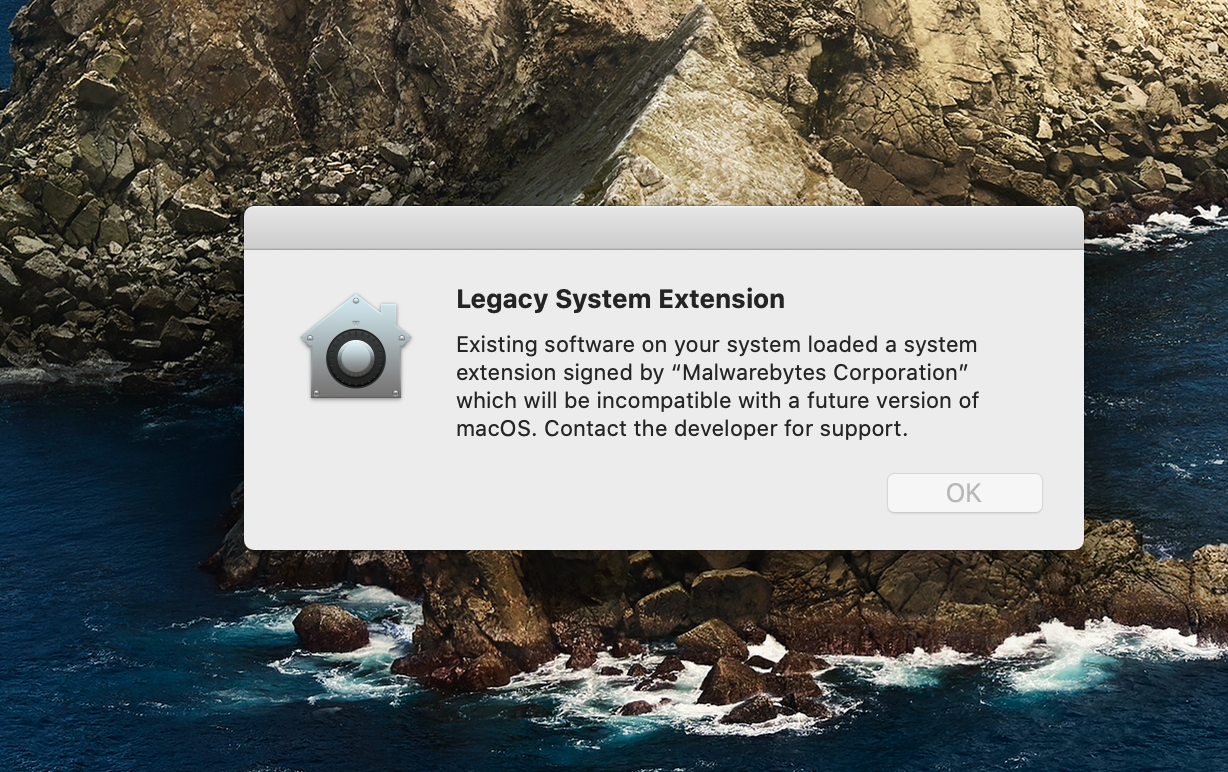 With Apple’s macOS 10.15.4 Catalina update yesterday, your computer is now likely warning you that you have Legacy System Extensions (sometimes called Kernel Extensions or kexts) that will soon cease to work. Don’t panic, nothing is broken, it’s just warning you that a future upgrade (probably macOS 10.16-yet-to-be-named this fall) might break some of your software if the developer doesn’t release an update. Or simply have reduced functionality.

Existing software on your system loaded a system extension signed by “Malwarebytes Corporation” which will be incompatibe with a future version of macOS. Contact the developer for support.

I’m seeing this currently for Malwarebytes, Dropbox, HP, and Valve (the company that makes Steam, the online video game store), but there are probably many others.

What is a Legacy System Extension? Simply put, it’s a program that injects itself into the kernel, the very core of the software that operates your computer. Hence the name “Kernel Extension”. It allows third-party software to do things like analyze every program you touch to scan for malware or to create pretend files and folders in Finder that actually exist in the cloud. They change how the fundamental parts of your computer work in order to add third-party functionality to your computer.

Why are Legacy System Extensions going away? In the past, a kernel extension was the only way to get some things done on your computer. The problem was if the extension was poorly written it could make your computer more prone to crashes or less secure. And many times OS upgrades are problems because the old extension works in a way that the new system software doesn’t expect since these things were really just jury-rigged and not. In short, Kernel Extensions were unstable, insecure, and messy, but somewhat necessary.

So what now? With macOS 10.15 Catalina this past fall, Apple introduced several official ways for programmers to get many of the same functions in an official, more controlled and secure manner, now called System Extensions instead of Kernel Extensions. There is nothing to worry about right now, as these old extensions will continue to work with Catalina. This message is just to warn you and the software developers that their software may not work as expected if you install the upcoming system software upgrade this fall. And to encourage users to rattle the cages of developers. I’m sure the major companies like Dropbox and Malwarebytes are already working on getting an update out before then or very soon thereafter.

For more technical information you can read Apple’s article on the new extensions.