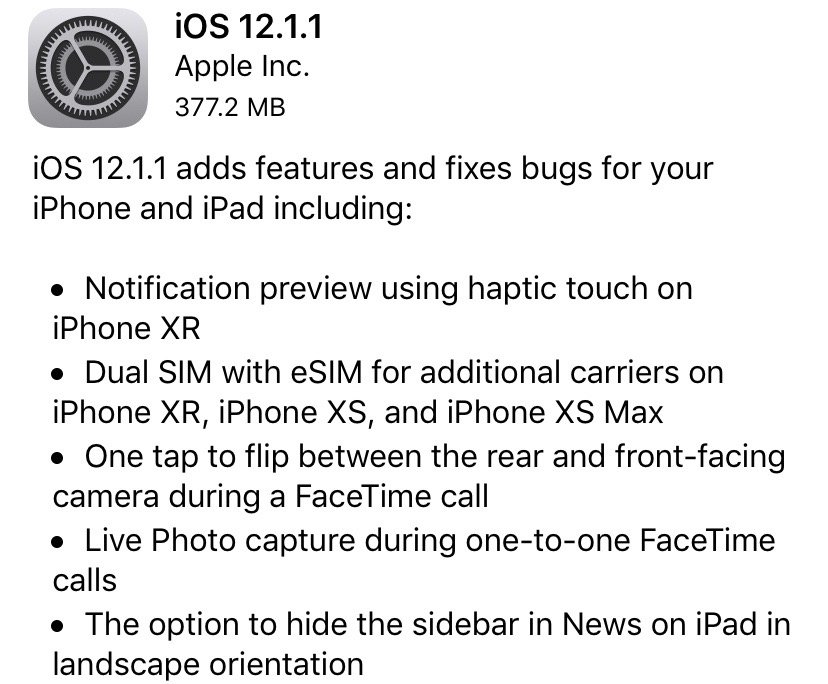 Today Apple released minor but important updates across all of their operating systems (with the glaring exception of watchOS, but I expect that to come shortly). The new feature list is short but there are a lot of bug fixes and optimizations and I highly recommend upgrading especially if you are already on iOS 12 and Mojave.

As always before an upgrade make sure you are backed up. A Time Machine backup will allow you to easily roll back in case the upgrade breaks something. An iOS backup will not allow you to roll back, but it will let you reinstall your current data.

iOS 12.1.1 adds features and fixes bugs for your iPhone and iPad. Features and improvements include:

– Notification preview using haptic touch on iPhone XR
– Dual SIM with eSIM for additional carriers on iPhone XR, iPhone XS, and iPhone XS Max
– One tap to flip between the rear and front-facing camera during a FaceTime call
– Live Photo capture during one-to-one FaceTime calls
– The option to hide the sidebar in News on iPad in landscape orientation
– Real-time text (RTT) when using Wi-Fi calling on iPad and iPod touch
– Stability improvements for dictation along with VoiceOver

This release also adds features and fixes bugs for HomePod including:

– adds RTT (real-time text) support for Wi-Fi calling.
– Adds a menu item to News for opening a story in Safari.
– Resolves an issue that may prevent iTunes from playing media to third– party AirPlay speakers.

Note that macOS Mojave has a new update procedure!

If upgrading to Mojave for the first time

If you have not yet upgraded to macOS Mojave but feel you’re ready now, first open Finder and head to your Applications folder, and if you have “Install macOS Mojave” delete that, as this will likely be the initial release. Then go to the App Store and search for Mojave or click this link.